Compassion & Violence - But how?

Is there a way  we could capture the magic of this concept promoting compassion  rather than violence?

A simple, yet complex idea.

While the original inspiration is from a  game beating enemies and collecting their loot, the episode also explores much more. Finn is heart-broken and emotionally withdrawn from his breakup with Flame Princess.  Jake's compassion and support for   Finn as he is going through an emotional and hard time is a key part of the show.  While Finn is    dealing with his problems with mindless  fighting, Jake is there to support him.

I don't think it will be the best idea to remove the combat aspect from the game. It is  true to the games origins    and seems to be   why so many of you love it.  My intention is to make this game the best I can, and work with the community to do so.

It seems like so many popular virtual reality games centralize around some kind of combat. This is true for traditional games in general, even outside of VR. However it feels like VR ha adopted this  even stronger than traditional games.   The Guitar Hero of VR, is inherently sword fighting. But VR has so much potential for empathy and compassion.

What if there was a way to make a game even better by promoting compassion? What if the user had a choice: Mindless combat, or doing something different?

I giving the user choice will be a key part to the success of this! If you just need to let something out and defeat some virtual slimes, you should still have the freedom to do that.   I don't want the compassion aspect to take away from that experience.

Some ideas I have gathered

from talks with a few of you already:

An idea I have had for a while, that was brought back to life through conversations with   Nick Oddson.

What if the game was about keeping a pet/buddy alive or  happy. A little creature inspired by Finn or Jake. Somewhat akin to Tamagotchi.

A buddy inspired  by   Finn, the buddy would    be    tormented by    his own issues, and it is your job to look after him. Feeding him, keeping him out of trouble. 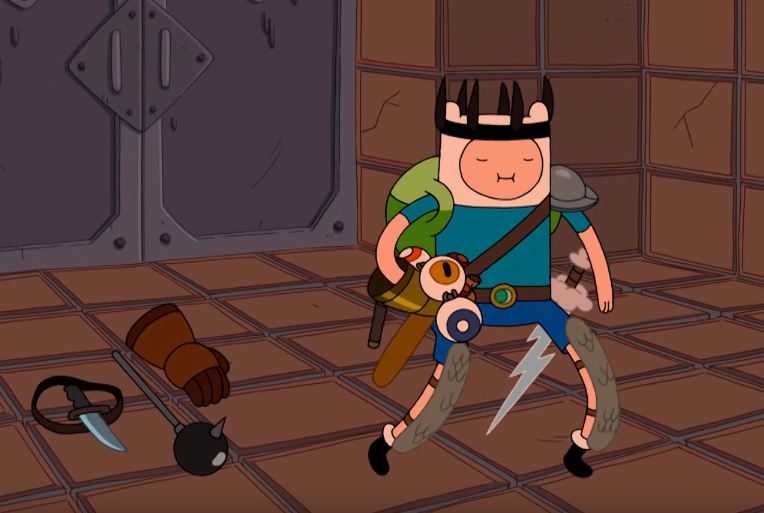 A buddy inspired by    Jake, the buddy would be  there because you are, he does not necessarily enjoy it and just wants to make sure you are okay.  Perhaps the goal could be to make it something you both enjoy.

I'm figuring out a way to get started on this that doesn't take to much work is my initial blocker. Namely, building friendly AI that can navigate the dungeon with you when it's procedural generated. The real time generated means   typical navigation systems become a little   more difficult.

Humanizing the creatures in the game. Similar to Minecraft, when I kill a horse, I feel like I'm a bad person.

Edward Piper has pointed out,   "The Legend of Zelda series handles combat quite well, esp the 3D games. LOADS of combat but it doesn't feel violent. You are defeating enemies rather than killing them."

These solution do not directly address compassion, its more like a band-aid for the violence- which is still helpful to think about!

I have a story framework    in mind, I don't want to ruin it for you by telling you just yet. I think it is something that will work really well with the infinite concept and be played out largely in your head so it can still be explored with every restart or even different game modes.  Something that answers the questions "Why am  I here on this train? What is it? Can I get off?"

Perhaps this can  promote compassion, and I think it will. But I don't want to rely on this alone.

Puzzles instead of combat

Sure this could be a puzzle game, and I think it will be, at least in part. But I am talk about making a mechanic or game-mode around compassion.

As    Nick Oddison also suggested "Or make the monsters an incentive to solve puzzles faster -- monsters are idling around, the goal isn't to kill them"

Or perhaps, not killing the creatures is the puzzle as suggested by  Rile on a previous post.  "like Slime Rancher, where you just have to understand and identify the dangers of the individual enemies and that way you can avoid them without harming them."

What input am I looking for?

What do you think about the idea of promoting compassion?

I want to make sure I focus on building things that people will enjoy.

How could I make game-play that works with compassion?

Do you have different ideas than the buddy system?    Or can you build on the existing ideas?

What are your favorite dungeon crawls or games that promote compassion? What makes them so good?

Thanks for listening, I am looking forward to your thoughts.

I always think its great to have a companion character in games so I reckon you're going down the right path.

A cool idea I had would be you could temporarily tame the monsters with a bit of food so that they don't attack you for a while, but if you leave it long enough they then become aggressive again. Maybe from that if you feed them enough you could befriend them and they evolve from their regular form into a companion with their own health bar for you to protect.

If the companion takes to I many hits and dies maybe it could spawn something like a revival item. Then  after a certain amount of carriages you could revive them at an altar of sorts.

That's one idea that I think wouldn't be bad to have in the game.

Taming the creatures in the game I think is a good ideal.

Thanks MonMaxibon, Glad to hear you think it is the right path!

I like the concept you're going for!  I think it's good to explore alternative and unique gameplay methods than what we're used to, especially if you can make it fit a theme-- And a positive one at that.

So an idea I just had:  Imagine if you could give different loot or foods to 'enemies' on the cart, and doing so would make them view you more positively, and once that happened a cart or store that you'd come across essentially has volunteer previous 'enemies' that now want to help you collect more loot.

>You enter a cart and Monsters are about.

>You pick up loot/food around the room, and give it to the monsters

>The more you satisfy, and less you hurt, the more they like you.

>They Appear in the Shop Area and are willing to help you gather loot (In my head either as a Buddy who directly follows you around, or as a scout that will loot for you while you're gone, and gives the items it finds when you return to the next shop)

Maybe you could even give them outfits or different decorations to help recognize and empathise with them.  And since they'll be actively helping you, you'll be forced to see the other monsters as more than Just enemies to kill-- In theory.  But it also wouldn't lock players who just want to fight out of doing so, and would give it's own advantages as opposed to compassion (I.E Helping them helps in long term Vs. Killing them gives more immediate loot)

Thia is just my thought though, I have no idea how easy/ hard this would be to integrate into the game or if it's a sound idea in the direction of where you'd like to head with the game-- But just thought I'd share!

I love Adventure Time, and I think this is a really cool Idea that leaves itself well from Just being an Adventure Time inspired game, and more of a concept that's yet to be tapped into and now has found a home on VR.  I can't wait to see where it goes from here, and I wish you luck!

Thanks Nullnvoid. Yes the taming is a strong idea, a few people are suggesting it. I also like the idea of equipping and customizing them and changing the perception of enemies.

I think making them useful like collecting loot is a good direction to take it.

I am also thinking of having a mode that is just, keep your companion alive. That's the whole goal.